Another one of those snarky posts I’ll probably be razzed for later, but it occurred to me as I was driving home tonight, and somewhat ties into the idea of "taking Australia":

Beta has lost all meaning in the online world. Flickr has been out since at least March of 2004. It’s one of the most-trafficked sites on the Internet. Yahoo bought it for a webmillion dollars. And it’s still "beta."

Gmail has been around over a year. Still beta. (By the way, if there’s anyone left in the world who doesn’t have a Gmail address, I have a scads to offer.)

Both are great sites and great businesses. But they aren’t "beta."

There’s disagreement as to whether beta is a fair warning or a cop-out. Users should expect the constant addition of new features. But after six months in the public eye (at most), I think it’s fair to drop the "beta" crutch.

"Really man, you can’t be mad that the hammer broke. It’s still in beta!"

There are no guarantees in this crazy startup world. But I promise you– If you aren’t less than two degrees of separation from one of our founders or investors, you will never see a "Pegasus Beta." We call it "Gary’s rule": If it doesn’t amaze you, we won’t launch it. If it doesn’t work, there’s no excuse.

In the meantime, I fully acknowledge that beta (even at over a year old) beats the hell out of pre-alpha.

I suppose that our state’s legislature might want to claim beta status on the recently-closed session. Another reason we need more people (citizens and journos) covering government at all levels.

A great, if lengthy, presentation on the new economics of media.

Also, for those who are tired of hearing the Long Tail meme, here’s proof of its ubiquity.

Gary has an analogy that he’s started using when people ask how we’re different from other local online plays (past present and future) with national ambitions.That’s a key question for us, because not (m)any of those have really been a hit. The answer goes something like this:

It’s like in the game Risk. There are two basic strategies that people play by: Some people spread their armies all over the map. Others set all their pieces in Australia, control it, and spread out from there. We’re Australia people.

Concentrate your force to attack. The best way to attack is to stack as
many pieces as possible into a single space and then roll, roll, roll
onward. Take a territory, move into it with everything you can, and
start a new invasion from that space. Keep doing that until you’ve
achieved your objective or run out of steam.

I also found an interesting ancillary bit of strategy:

Because of that, it’s not worth taking a continent if you can’t hold
it. You’ll only invite vicious counterattacks. It’s better to build up
for a while and then grab the last few territories with enough strength
to hold them.

As a rule, people who try to "scale local" must have been horrible Risk players as children. Yeah, it doesn’t cost much — only one army — to plant a flag in twenty, a hundred, a thousand markets. And that low-Risk strategy wastes an army (but only one!) when a better-heeled competitor drops a scant four armies in your market.

There are a lot of great localweb ideas that have underperformed because of this strategy. Digital Cities. ServiceMagic. Angie’s List. CitySearch.

Now, comes citizens journalism and local search. And from what I see, the primary strategy is still to create an engine and put it everywhere from Greenland to Kamchatka.

Why doesn’t the flag-planting strategy work?

There’s a final point that (so far) only relates to the big corporate sites: There’s a certain sameness and sterility built in (probably to enable "scaling) that screams to the user: "This is the coolest slickest system we could deliver you without actually taking the trouble to put people in your community to understand what it’s all about and the difference between the cool stuff and the not-cool stuff." It’s like the beverage machine in The Hitchhikers Guide to the Galaxy:

When the Drink button was pressed it made an instant but highly detailed examination of the subject’s taste buds, a spectroscopic analysis of the subject’s metabolism and then sent tiny experimental signals down the neural pathways to the taste centers of the subject’s brain to see what was likely to go down well… [I]t invariably delivered a cupful of liquid that was almost, but not quite, entirely unlike tea.

And let’s not forget that the makers of said machine, the Sirius Cybernetics Corporation, were "a bunch of mindless jerks who were the first against the wall when the revolution came."

Re-reading this overcaffeinated Sunday-morning rant, it strikes me that it’s another one of those posts whose sense can be lost in the fact that we don’t yet have a product out that answers these criticisms. In a way, though, it’s the explanation of why we don’t. We believe that we have to take Australia before we fan out o’er the world, and that throwing one army in isn’t enough. We’re looking for "armies" to deploy in building such a product. While we certainly will keep scale in mind while we deploy those armies, their on-the-ground mandate will be to help our users kick ass. But first, we need armies. And while they ain’t cheap, they cost a lot less than the alternatives.

Although I try to keep this blog on-topic(s), discussing new media, wedia and our launch trevails, I let myself slip around the time we were opening our office with a post on the closing of the Gabberts Outlet Store.

Interesting that we get around ten people finding this site every day via a search for some permutation of "Gabberts Outlet Closing."  It’s our most popular search term after "Pegasus".

I haven’t seen any local media outlet cover this event. And even if they have, it’s not Google-able, so it really doesn’t matter. (Chew on that one for a minute.)

But to me, it’s news. And apparently to a lot of other people. I wouldn’t even call it long-tail news. It’s mundane commercial news, something the MSM is apparently above.

At the same time, James O’Neill at the DMN delivers a wonderfully thorough investigation of the fallout from the glitches in the "Adult Information System" at the county jail. There’s a lot of personal stories amongst the wealth of data he had to pile through. It’s the sort of report that logistically can only be completed by someone working on it full-time. In other words, it’s a story that could have been suggested by, but not likely produced by citizen journalists with day jobs.

Both items are news. Somebody should bring them together.

Over the past couple days I’ve re-re-rediscovered LinkedIn, as a result of someone sending me an invitation. Very cool service– even if you weren’t going to use it for networking, its Outlook import/export functions and contact grab are more than worth the price of admission.

The multiple "re"s in the reintroduction are because my first couple experiences with LinkedIn must not have been terribly memorable — I had forgotten I’d ever signed up, but now that I’ve dug into it, I apparently have three(!) accounts under different email addresses. I’ve asked customer service to merge them.

If you’re a LinkedIn user who knows me, my (active) account is under mikeorren(at)pegasusnews(dot)com.

It’s been a while since I preachified about the Long Tail. Chris Anderson has a post about the signal-to-noise ratio in the outer tail that is full of lessons for those of us trying to capture the long tail of news and advertising.

This should scare the hell out of anyone running a newspaper or website that isn’t "The Daily Me":

This is why niches are different. Your noise is my signal. If a
producer
intends something to be absolutely right for one audience it will by
definition be wrong for another. The compromises necessary to make
something appeal to everyone mean that it will almost certainly not
appeal perfectly to anyone–that’s why they call it the lowest common
denominator.

And yes, I’m presupposing that there is or is soon to be no more "mass."

Anderson’s punchline, which bodes well for our business plan:

All this leads to three counterintuitive lessons of the Long Tail.

Jeff Jarvis notes the shuttering of a high school newspaper in Georgia. The students have a blog telling their side of the story and linking to PDFs of their work.

Jarvis urges folks to write the school principal to make a case for continuing the paper. I’d like to suggest that folks in the media community go a step further — the stated reason for the discontiuation is financial, peppered with complaints about quality of reportage. If you’re a journalist or former journalist, or a writer with formal or experiential training in reportage, send your email with an offer to edit/advise the students by phone or email.

My email to the new principal and the former principal (now superintendent) is in the continuation of this post.

END_OF_DOCUMENT_TOKEN_TO_BE_REPLACED

I’ve increasingly found myself nodding and giving a "hell yeah!" to the writings on Jay Small’s Small Initiatives blog. The former Belo Interactive-now Scripps executive’s second post in his series on "Saving Newspapers" reads like our business plan, save for his optimism about segmenting print editions.

(There are a lot of smart people– Jay, Vin Crosbie, Sammy Papert among them– who advocate individualizing print editions. I buy it on the manufacturing side, but it’s the distribution that I can’t get my head around. Maybe at a less-than-daily frequency delivered by mail, but I can’t see the carriers making the shift to thinking about which paper goes on which doorstep.)

Jay’s basic premise for the "Daily Me" is right on, though:

Newspaper managers have to stop blindly assuming they are
producing the only — or the best — news product their readers see
every day. That assumption is what puts Bush/Putin in the lead
spot on A1, and allows all the local sportswriters to doze because no
high school events happen to be played on Sundays.

Be sure to catch the bulleted suggestions for how best to fill the paper at the end of the post.

And, in a post on Craigsnews, Jay hits on the business problem that I think most of the citizens journalism outfits are up against:

That’s why I believe most community journalism efforts as currently
conceived, minus an overlay of agenda-setting professional reporting by
someone (I’m not presuming that’s established media, just not
occasional, amateur practitioners), will eventually fail one of two
ways:

I’m not sure I want to be right about this. Someone prove me wrong.

We hope to prove him wrong, but if we do, I think it will be by producing a hybrid. And that’s our biggest challenge — figuring out a way to provide consistency from professionals and a respectful, open environment for citizens while still making a buck.

I wanna have pride like my mother has
And not like the kind in the bible that turns you bad.

last week, we read all about the ways in which texas news organizations were reaching audiences during the winter storm: early print deadlines, texting, newsletters, to name a few.

at @dallasnews, we also saw a ton of success with instagram. here’s a brief look at what we did ⬇️ 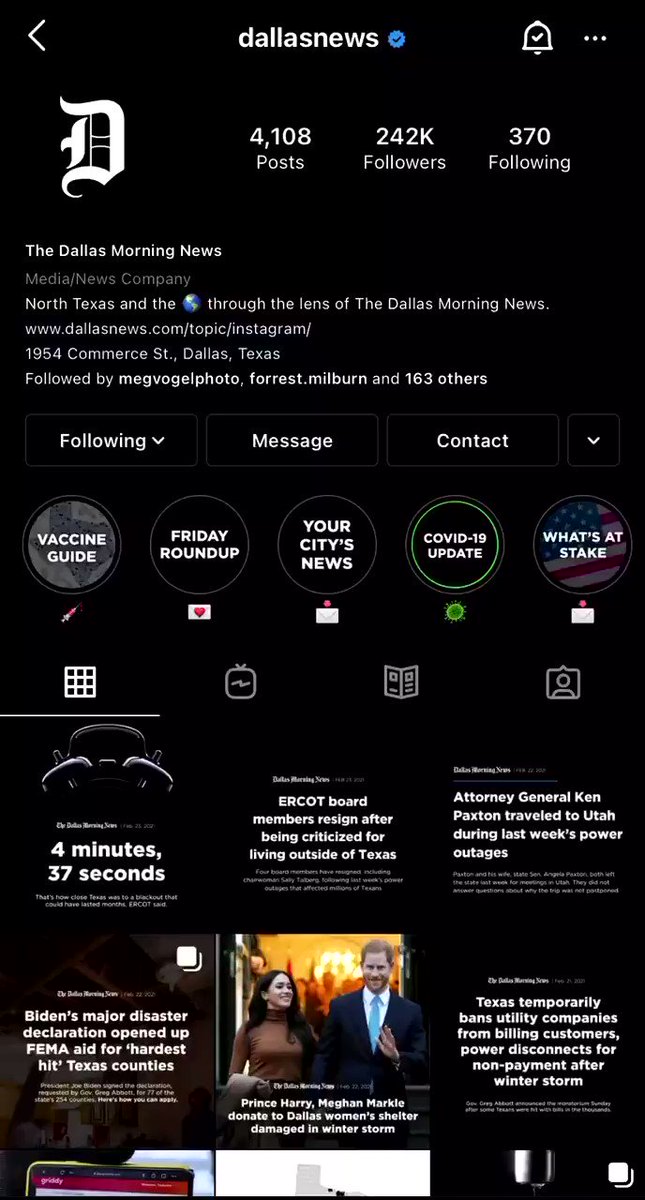 Some clever muggins is going to create a bot army that AI-generates salable tweets.

I keep looking for macropayments. Hell, why stop there?

Welcome to the Gigapayment economy.

what if micropayments but instead just payments

I'm ready to see the business model on "SuperUnfollows."